The Online Discussion is set up with 63 topics. 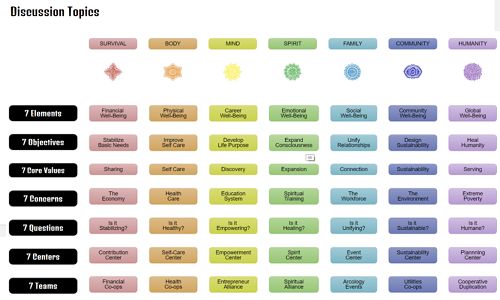 The number 63 may be understood as being a number 9 with an affinity for family and creative self-expression.

The energy 63 represents includes the ideas of philanthropy, healing, and optimism.

It resonates with justice, human welfare, and a harmonious home — elements generally included in its vision of an ideal society and environment. The energy tends to be creative in the pursuit of its ideals, trying this and that to see which works best.

63 is able to estimate future conditions affecting humankind by extrapolating trends and effects from current and past conditions.

It is worldly and sophisticated and has a global consciousness.

63 donates funds and its own time and resources to make progress toward fulfillment of its vision.

The energy a numerology number represents can be thought of as the number's essence, its basic tone or vibration. As an overview, the essence of the number 63 is a composite containing the ideas of:

Here are example interpretations of the number 63.

See the article About Numerology Number Meanings for an introduction to the essence of the energies numbers represent and deriving meanings for numbers depending on what the number pertains to or is associated with.

The Basic or Core Essence of 63

The deep down basic essence of the energy the numerology number 63 represents is nurturing of the human family, compassion, and idealism. Other meanings of the number 63 must take that vibration into account.

To better understand the essence of 63, let's have a look at its composition and the number it is reduced to. The number 63 is composed of the digits 6 and 3, and is reduced to the single digit 9:

The digit the number is reduced to (the digit 9 in this case) always has more force or capacity than the digits of the number being reduced.

this blend resulting in an essence unique.

If you can imagine a number embracing all of humanity as if it was its family to nurture and protect, you have an idea of what the 63 energy is like.

The essence of the energy the number 63 represents is intent on human welfare. It has broad vision, generally focusing on all of humanity rather than restricting itself to certain geographical locations or certain classes, religions, or races. The energy promotes just treatment and opportunities for all individuals.

There is virtually no judgement of lifestyles, societal expectations, religious beliefs, and political ideologies — so long as 63 sees them as just.

63's vision of an ideal society includes freedom of action, unrestricted thought, material sufficiency, ample career opportunities, and an absence of prejudgment of races and classes. The ideal is always in focus and is considered whenever a decision is made\.

The number 63's talent for creative self-expression lets it communicate in ways that make it more understandable than it would be without that asset.

Imagine humanity feeling like your family and its welfare being your highest priority. Compassion and tolerance are innate, as is a vision of an ideal society. Your own life feels harmonious. You're able to come up with creative ways to express what you need to communicate. Your perception is virtually unlimited.

We are a nonprofit organization.
PLEASE DONATE

IMPORTANT: You must create a profile to sign up for a course or a group.

Please confirm you want to block this member.

You will no longer be able to:

Please note: This action will also remove this member from your connections and send a report to the site admin. Please allow a few minutes for this process to complete.

You have already reported this .
Clear Clear All

You can find out more about which cookies we are using or switch them off in settings.

This website uses cookies so that we can provide you with the best user experience possible. Cookie information is stored in your browser and performs functions such as recognising you when you return to our website and helping our team to understand which sections of the website you find most interesting and useful.

Strictly Necessary Cookie should be enabled at all times so that we can save your preferences for cookie settings.

If you disable this cookie, we will not be able to save your preferences. This means that every time you visit this website you will need to enable or disable cookies again.

This website uses Google Analytics to collect anonymous information such as the number of visitors to the site, and the most popular pages.

Please enable Strictly Necessary Cookies first so that we can save your preferences!